One of the recurring themes of this blog is the cycling I did back in the 1960s in Modesto, California, riding with a club called the Modesto Roadmen. I cannot remember when this club was founded, it could have been as early as 1963 or as late as 1965. I had my last contact with the Modesto Roadmen in 1969, at the Great Western Bicycle Rally. Last, that is, until I was telephoned by a fellow member, Paul Robinson, in 2008. It was Paul's telephone call that inspired me to restart cycling. (I believe it similarly inspired Paul.) Besides cycling, Paul's call also inspired me to reconnect with the former Modesto Roadmen. Over time, one by one, I managed to reconnect to nine or ten of them. As 2008 ground onwards towards 2016, a dream started to grow of having a 50th reunion. But if we don't know when the club was founded, how can there be a 50th reunion? Simple, by picking some Modesto Roadmen event that occurred in 1966 and build the reunion around that. There were two candidates, the first Mountain Loop, and the first running of the Tour de Graceada. The 50th anniversary of the first Mountain Loop came and went with no reunion, but not the 50th anniversary of the Tour de Graceada. The Tour de Graceada was the annual ABLA-sanctioned sponsored by the Modesto Roadmen. (ABLA is Amateur Bicycle League of America, predecessor to today's USA Cycling.) It was first held on September 11, 1966. So a plan was hatched. One of the former members, John Campopiano, lives a few blocks from the park around which the Tour de Graceada was held. He invited us all to meet at his house with our bikes, to take a symbolic lap or two around the park, and then hang out at his place for brunch and memories. And that is what we did, on September 11, 2016, 50 years to the day after the first running of the Tour de Graceada.

Some of us are married, some of us are not. At least one of us has a girlfriend. Yes, there were female members of the Modesto Roadmen (despite our sexist name), but sadly, we were unable to find any of them for the reunion. Of the four Significant Others attending, three are pictured below:


Once everyone had arrived, we all jumped on our bikes and rode the four blocks from John's house to Graceada Park, home of the Tour de Graceada. We really didn't have anything planned other than a symbolic lap or two around the park. We were on a wide range of bicycles and with wildly different levels of fitness. Right off the bat, Eldon and Mike took off at race pace. Some of us chased and others of us rode at a comfortable pace. How long would this go on? How would we decide? After four laps, people started pulling over at what had been the start/finish line and that was that. (Back when we were racing as juniors, we went around this 0.6 mile course 25 times.) I have assembled a collage of four pictures which captures all nine of of us:


The Campopiano's put out a magnificent spread that kept all of us happily eating from 10:30 in the morning when we started arriving until at least 3 pm which is when I had to leave. Sadly, we did not think to photograph this largess, but you can get a peek in the following photo:


John had assembled a huge collection of Roadmen memorabilia, and I brought a few things of my own. I think the roadmen enjoyed this walk down memory lane, as seen below:


But probably the most fun of all was just the talking, memories of the Modesto Roadmen, what we had been up to for the past 50 years.

An attendee I have yet to mention is Tom Duchscher. He was not a member of the Roadmen and was not invited to the reunion. However, he is an intense cycling enthusiast, a neighbor of John's, saw us riding around the park, and had just had his very high end road bike stolen and wanted to pass out his wanted posters so we could keep our eyes open for his bike. He entertained us all with an intensely detailed account of how, back in the 60s, he saved for years to purchase the Masi that one of his fellow cyclists recommended, found out there was a three year waiting list, purchased a Schwinn Paramount instead, thus launching a series of Paramount purchases in Modesto somehow enforcing a rule that no two could be the same color. But none of this is the most amazing thing he told us. Back in 2008, as I was trying to reconnect with former Roadmen, Paul told me that someone told him that Jeff was dead. We were all very sad, and I even wrote an eulogy for him on this blog (since deleted.) One of the first things that Duchscher announced when he walked in the door what that he was the source of that rumor! He had no recollection of where he heard it, so for now, the blame has to stop with him.


The final picture is chronologically out of order, but I felt belonged at the end. After the ride and before all the eating and talking described above, Paul had a wonderful idea. He suggested we take a moment to remember the people who had been critical to the success of the Modesto Roadmen, but who were no longer with us. These were adults (with one exception) who took time away from their lives to help the Modesto Roadmen purely out of the goodness of their hearts. I didn't take notes, so this list might not exactly match up with what we came up with then, but I guess that is OK. Henry Laws lived two houses down from me, took an interest in our club, and hooked us up with his connections to the City of Modesto power structure; without him, we never would have been able to put on the Tour de Graceada. He and his wife rode a Schwinn Twinn tandem bicycle. Bob Boranian owned Bob's Cyclery, the center of cycling in Modesto. He gave a number of us jobs working in his shop, drove us to events, and supported us in an uncountable number of other ways. (We are not 100% sure he has passed away, but even if not, he deserves the honor.) "The Coach", Mr. Van Holland, was a member of the Dutch underground during World War II and was a cycling enthusiast. One day, he saw us riding down the road and immediately started training us. Art Wilcox was the other member of the Mach Schnell bike club, besides Mike Haack. Sadly, Art died much before his time. Art and Mike, older than the Roadmen, got us started riding Mountain Loops and generally shared their cycling experience with us. When the Modesto Roadmen started racing, two members of the cycling establishment, Robert Tetzlaff and Walter Gimber, guided us through the process of becoming bicycle racers, once travelling from their homes in the bay area to Modesto to go on a ride with us to make sure we were doing it right. For these and all we have forgotten, thank you! 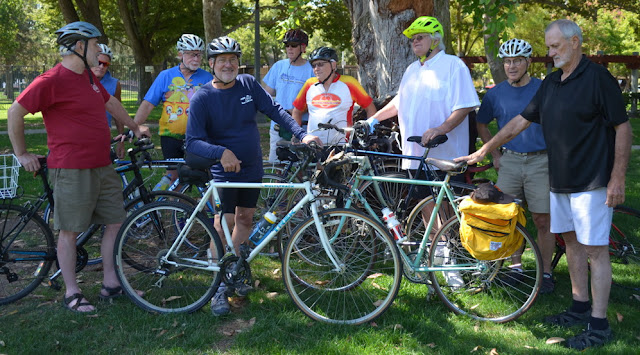 So that was it for the 50th anniversary of the Modesto Roadmen. See you all again in another 50 years.


The Modesto Roadmen have a website. There are lots of pictures and other information there that I have not put onto this blog. Once I put the reunion up there, there will be a lot more there that what is here.

What I Am Following

About the Zombie Cyclist